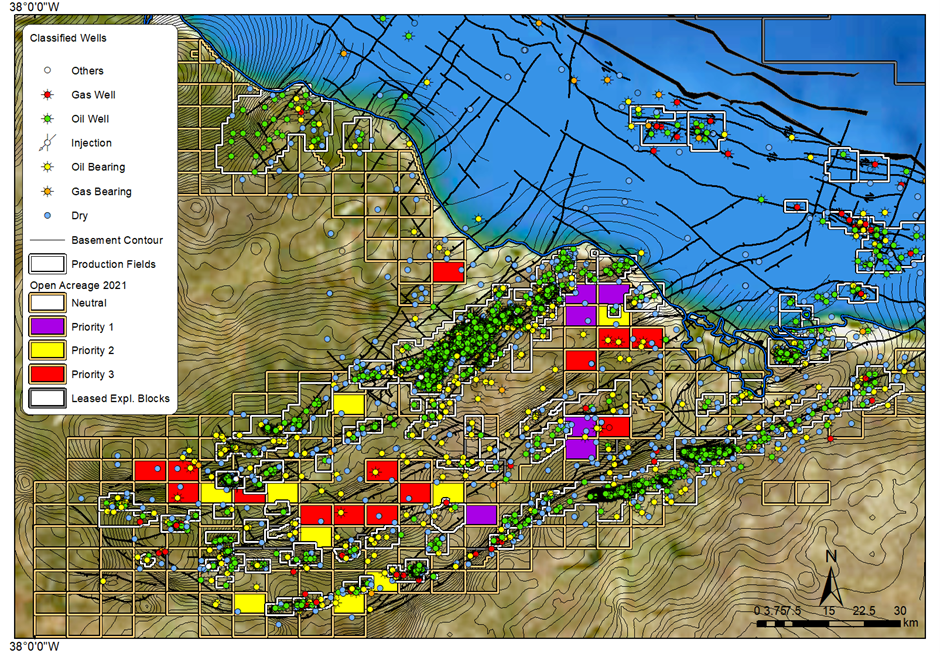 As we mentioned last week in our ranking of the open offshore acreage, the second cycle of ANP’s permanent offer is just around the corner. With this in mind, we decided to take a look at all the blocks on offer in an attempt to rank them according to exploratory attractiveness. This week we turned our eyes onshore.

Petroleum exploration in the Brazilian onshore has a long history, dating back to pre-1950, when private companies and the government drilled several shallow wells in search of oil based on surface geology, terrain morpho structural analysis, hydrocarbon shows close to the surface and tar sand occurrences. A modern phase of exploration based on subsurface data ramped up over the decades that followed, when the old government department called CNP drilled the first deep wildcats in the country, with Petrobras intensifying activity after its creation in the late 1950s. After the 1970s, a lot of work was concentrated in the intracratonic basins of Amazonas, Solimões, Parnaíba and Paraná, as well as in the northeastern intracontinental rift basins like Recôncavo, Sergipe-Alagoas and Potiguar. This resulted in a successful history of O&G exploration and production in the Solimões and Northeastern basins, while the others continued as exploration frontiers. In recent times, Eneva has also turned the Parnaíba and Amazonas basins into productive acreage, mainly for gas.

This makes the onshore a mix of acreage with different exploration maturities and several grades of attractiveness for Paleozoic carbonate/terrigenous and cretaceous sandstone reservoirs. The onshore acreage can be strategically subdivided into frontier Paleozoic sections created by sag subsidence underlaying Mesozoic sedimentary sections and mature cretaceous conventional sandstones within rift basins, which are very attractive for re-exploration and EOR application based on new reservoir engineering technologies. As such, our review of the exploration potential of the onshore blocks leveraged all the available data and industry knowledge contained in our BPS basin reports. The geological histories vary across the offered open acreage, but the methodology follows the same approach applied to our study of the offshore basins, in which the blocks were ranked regarding expected volumes and fluid type, as well as retention risk (trap and seal) and reservoir and charge conditions. Again, to build these technical rankings, our geochemical and well evaluation library was integrated with the comprehensive analysis contained in our BPS basin reports.

The maps in figures 1 through 6 show the studied blocks overlaid on terrain images and contour lines of the basement. In the Paraná Basin (Figure 1), the offered blocks are in the central-northwest trough, where there is potential for gas in the Carboniferous reservoirs and gas + oil in the Devonian reservoirs. The existence and integrity of the traps was also analyzed for the ranking. For the Parnaíba Basin (Figure 2), the blocks surrounding those already under concession were prioritized, considering a modified petroleum system marked by diabase sills that work as a mechanism for generation and also as seals for the Devonian and Carboniferous reservoirs. The depths of the reservoirs were also considered for the prediction of pressure conditions for production, in analogy to the production fields of Gavião Real, Gavião Branco and Gavião Vermelho. The Amazonas Basin (Figure 3) also presents good potential for further exploration given the recent consolidation of production in the Azulão Field, as well as the existence of numerous wells with positive results in the surrounding areas. Some of the offered blocks already have hydrocarbon bearing wells that must be better evaluated regarding trap amplitude and via higher-quality seismic imaging. The Tucano and Recôncavo basins (Figure 4) present differing levels of attractiveness, with the Tucano Basin being high risk and high reward in the case of new discoveries of gas accumulations, while the Recôncavo Basin could potentially have smaller accumulations in its northwestern flank. It is important to emphasize that some blocks in the central portion of the Recôncavo Basin have the potential for deeper pools or unconventional resources, despite being considered neutral due to the lack of data for in-depth evaluation. For the onshore portion of the Alagoas Basin (Figure 5), the blocks surrounding the existing production fields present reasonable potentiality, being very dependent on the acquisition of new seismic. The Potiguar Basin (Figure 6) emerges as the best mature onshore area, mainly for a few blocks in areas with proven reservoirs, with the potential for traps similar to those in nearby producing areas, but also needing better seismic imaging. There are also some extremely attractive blocks with the potential for small to medium-sized accumulations in stratigraphic traps, as well as the still untested structural traps close to regional faults.

All in all, there are many reasons to continue exploration in the onshore acreage, with most requiring lower exploration CAPEX than the offshore areas. Several blocks present the potential for small to medium pools of oil and possibly large gas accumulations, mainly in the frontier underexplored Paleozoic basins, which are very well positioned in terms of logistics and proximity to market. There is also the potential for synergies for those companies already settled into some sweet spots close to producing areas, mainly in the intracratonic rift basins, which show diverse potential for high rates of return and low, medium or high risk.