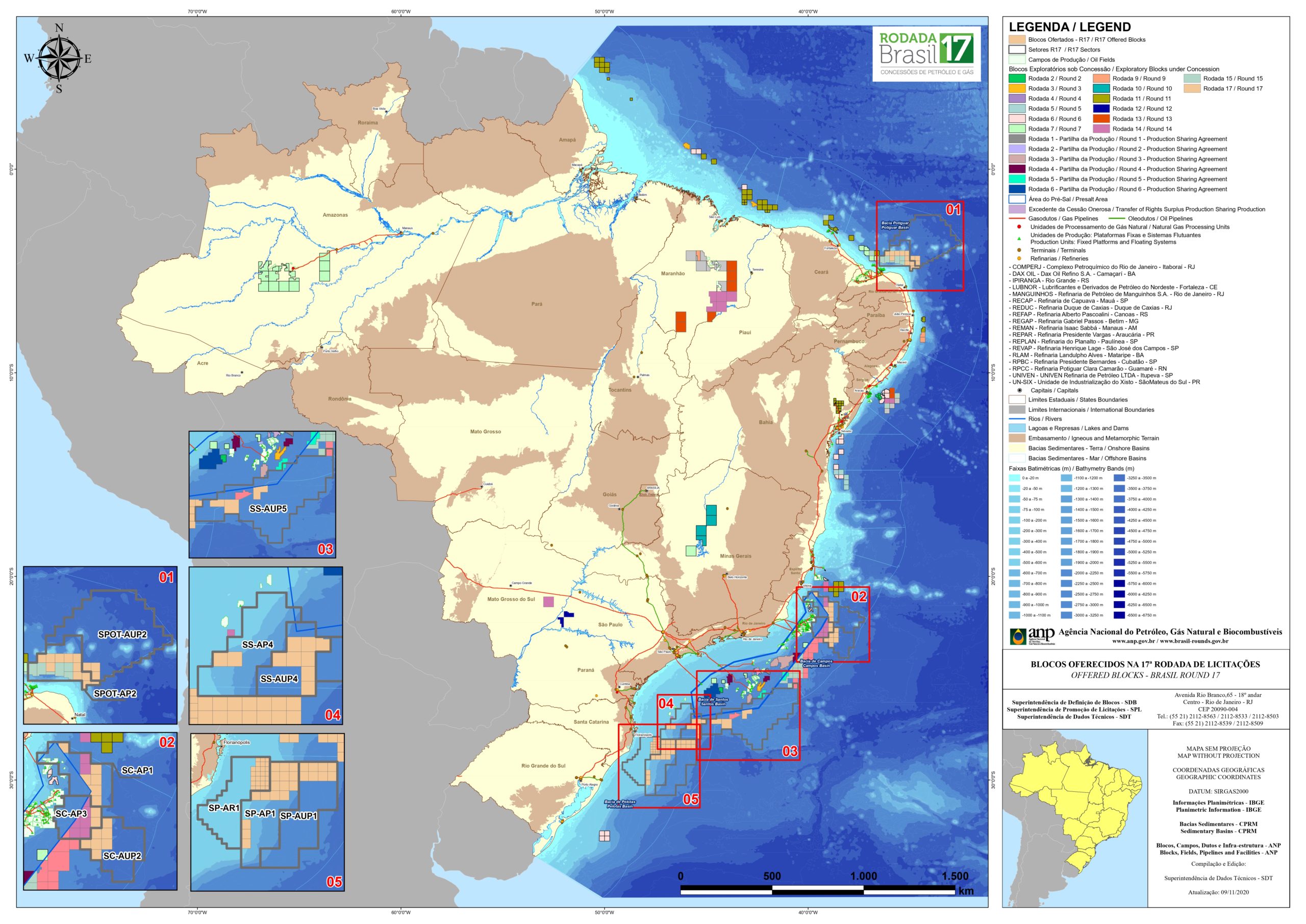 The National Energy Policy Council, or CNPE, approved 92 offshore exploration and production concession blocks for sale at the country’s pandemic-delayed 17th bidding round slated for October, ANP said on the 7th.

“There will be 92 blocks offered in the offshore sedimentary basins of Potiguar, Campos, Santos and Pelotas,” the ANP said in a statement. The blocks cover 53,900 square kilometers, according to the agency. ANP will hold a public hearing to discuss the auction rules and concession contract on February 3, with the public bidding round scheduled for October 7.

The approval of the blocks followed a decision by CNPE on December 11 to remove 32 offshore blocks from the round because of environmental concerns that have caused issues with drilling permits in other blocks in the area. That included denials to drill in the Para-Maranhao and Foz do Amazonas basins along Brazil’s equatorial margin, which caused industry heavyweights such as BP Energy and Total to bail out of the promising area.

Several of the blocks were expected to generate heated competition despite the environmental concerns, because of the potential for holding deepwater deposits similar to ExxonMobil’s Stabroek block discoveries off the coast of Guyana. The US heavyweight has made 18 discoveries and pumped first oil from the block in December 2019. The Stabroek block is estimated to hold more than 8 billion barrels of oil equivalent in recoverable reserves.

The same play is believed to extend along Brazil’s northern coast in the Foz do Amazonas and Para-Maranhao basins, according to geologists.

Environmental groups, however, started to protest against drilling in the region after the discovery of a coral reef in the turbid waters at the mouth of the Amazon River. The groups said drilling could damage the reef and affect marine life in the area. The claims have gained even more weight during the coronavirus pandemic, which has made companies reevaluate environmental issues amid calls for greater reductions in greenhouse gas emissions to counter climate change.

The removals, however, also underscored that regulators were working more closely together to avoid the types of uncertainties that undermine investors. Since 2016, ANP has worked with the Brazilian Institute of the Environment and Renewable Natural Resources (IBAMA) on preliminary approvals after winning bidders in the 11th and 12th bidding rounds were prohibited from drilling in many of the blocks sold.

The 12th bid round featured 72 onshore blocks primarily earmarked for oil and natural gas exploration and production that utilized hydraulic fracturing techniques. A series of court-ordered injunctions blocked further development and resulted in blocks being returned to ANP. ANP has since worked to secure preliminary environmental reports from IBAMA ahead of the bidding rounds to ensure no major issues will appear during the process to secure drilling permits.

The consolidation will expand the size of the blocks available and potentially make them more attractive to potential investors, especially in frontier areas without a long history of exploration and production such as the southern Santos Basin.

The 17th bidding round will also be the first to include blocks beyond Brazil’s 200 nautical mile Exclusive Economic Zone, which was approved by the CNPE in February 2020. The blocks hold subsalt potential and are located on the southern fringe of the subsalt polygon that requires production-sharing contracts for development. The areas, however, will be sold under the more-favorable concession contract that requires oil companies to pay royalties on output rather than guarantee the government a share of profit-oil production.

Future auctions will likely include additional concession blocks that sit beyond 200 nautical miles of the coast as Brazil looks to delimit the full scope of the subsalt frontier, according to government officials.

Check out all the sectors on offer.

We use cookies to ensure that we give you the best experience on our website. If you continue to use this site we will assume that you are happy with it.Ok