Santos Basin: It’s out there, get ready 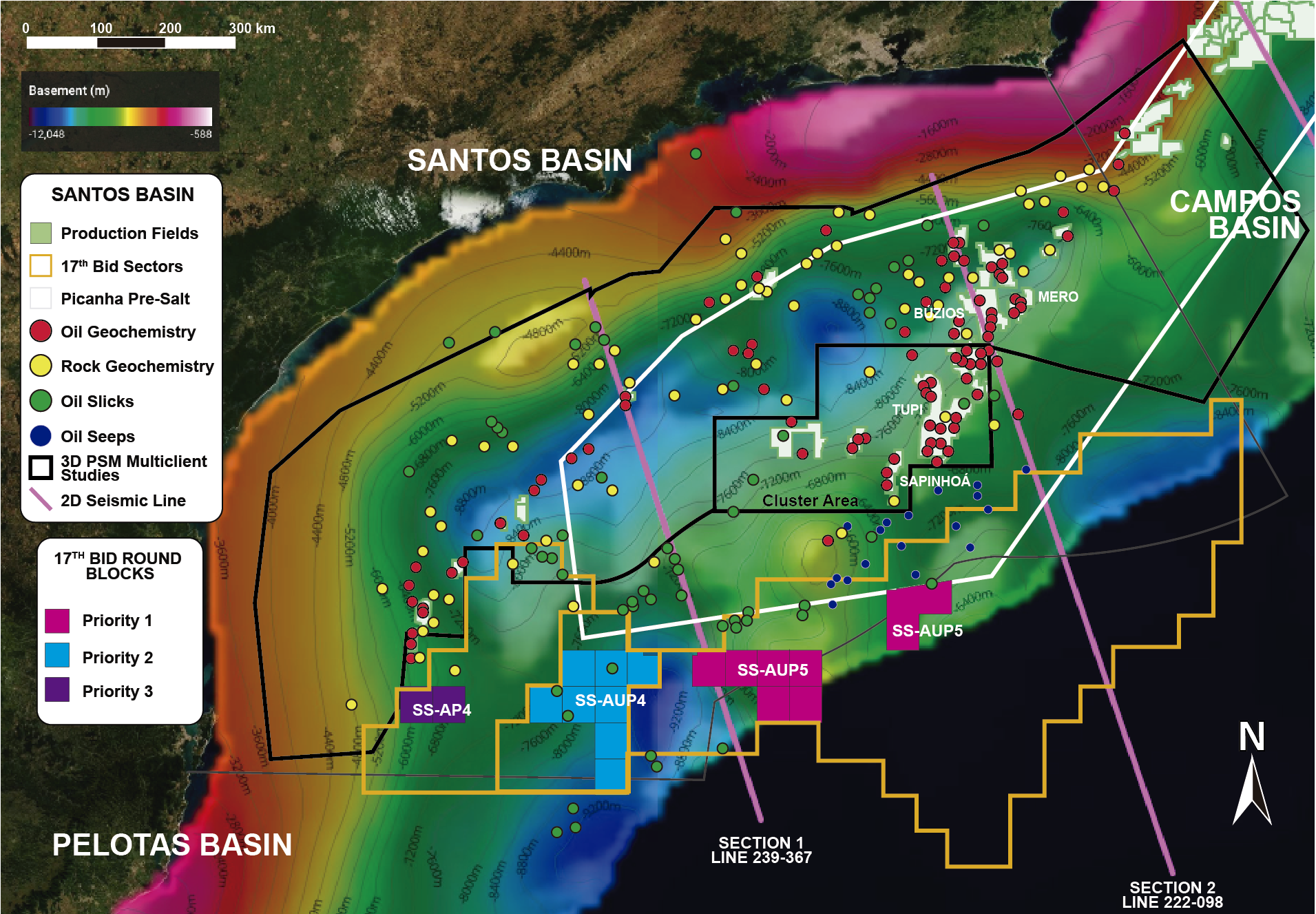 With all the success in the inboard “Picanha” area of the Santos Basin over the last 15 years or so, the search for other supergiant oil fields in the outboard is already underway. In fact, ANP’s upcoming 17th Bidding Round (October 7) will feature three outboard sectors (SS-AUP5, SS-AP4 and SS-AUP4), with a total of 17 blocks. Unfortunately, the mixed results of recently drilled wells 1-BRSA-1363-RJS (Peroba Block) and 1-SHEL-33-RJS (Saturno Block) have probably increased the perceived exploration risk associated with this exploration frontier. That said, the wells did indicate that similar elements and processes of the petroleum system present in the inboard could indeed exist further out. Today, we will leverage the results of our ongoing 3D PSM study of the Santos Basin (both inboard and outboard) to shed a little light on what’s up for grabs in October.

The recent seismic acquisition and interpretation carried out by TGS across the outboard province has already demonstrated that traps and seals are present in some of the blocks on offer. A series of 2D long-offset and 3D seismic surveys have been conducted across the outboard and beyond the continent-oceanic boundary (COB) and 200-nautical mile limit of the Exclusive Economic Zone (EEZ). The use of new seismic acquisition and processing technologies have tremendously improved the imaging of the sub-salt, providing an optimal framework for detecting and disentangling the complex geology of the layer’s structural model and reservoir containment (e.g., Fig. 2).

Now, the most significant uncertainty regarding the ongoing and future exploration in the ultra-deep outboard waters of the Santos Basin is to predict how far the pre-salt mid to late Aptian lacustrine hypersaline (Sag) / upper and Lower Barremian lacustrine saline to brackish (Rift) sources and Aptian microbial reservoir systems extend beyond the limits of the already well-understood “Picanha” comfort zone (Figure 1). Understanding the charge is the biggest competitive advantage a company can have in assessing exploration in the pre-salt outboard.

The seismic line taken from Zalán and Newman (2020) illustrates an example of the pre-salt section in the outboard area of the Santos Basin, showing a structural closure at the base of a very thick salt sequence (cf., magenta), in addition to seismic facies that suggest the occurrence of pre-salt microbial carbonate reservoirs. The strong parallel planar reflectors right beneath the salt (in light blue) are suggestive of deposition in a carbonate-ramp environment (Zalán and Newman, 2020).

With this in mind, BPS is working hard to unravel the charge system for pre-salt exploration in the Southern-Southeastern portion of the basin, where very attractive blocks are being offered in the 17th Bidding Round. The solution will come soon via the application of the advanced compositional petroleum system modeling (PSM) approach from source to trap, calibrated with oil slicks detected by satellite imaging (SAR), oil seeps detected by seabed piston cores and advanced geochemistry of oils and source rocks from the oil fields found to date in the Santos Basin (Figure 3). All this data and more is already available to subscribers of the BPS Geodatabase.

And now, our rankings…

The exploration ranking of the blocks of the 17th concession round was based on a solid foundation of 2D and 3D PSM covering three main exploration areas and frontiers in the Santos Basin (Fig.3):

It is important to mention that no wells have tested targets in the outboard area yet, so this risk analysis was calibrated by elements and processes of the pre-salt petroleum system taken from successful mature areas like the central-north portion of the Santos Basin, today considered one of the largest deep-water oil provinces in the world.

The basement map shown above in Figure 3 is a proxy for the presence of mature source rock in the structural lows and potential reservoirs and traps in the highs. When integrated with the oil slick, oil seep, oil and source rock data, as well as the 2D and 3D PSM performed by BPS, it allowed to estimate hydrocarbon risk and generate a ranking of the exploration blocks to be offered in ANP’s 17th Bidding Round. The blocks were ranked as 1 to 3 (from higher to lower priority).

All the exploration blocks from sector SS-AUP5 were ranked as Priority 1 due to their association with a pronounced structural high in the mini-basin domains associated with the presence of analog pre-salt reservoirs and trap/seal features. Moreover, several oil slicks and lacustrine oil seeps were identified in and around the blocks. The 2D PSM of line 239-367, which crosses this sector in the basin’s deep domain, together with the ongoing 3D PSM being conducted by BPS, confirms the presence of at least two active oil prone petroleum systems in the area (e.g., upper Barremian Itapema and lower Barremian Picarras formations below 7,500 m in depth, presenting 100% transformation rate). In fact, these source rock systems actually overlap each other, which could enhance the efficiency of hydrocarbon generation pods and migration charges in the area. Finally, as illustrated in Figure 4, present-day migration data of the 2D line (cf., 239-367) suggests that the main hydrocarbon accumulations are located on structural anomalies, as drawn in the section along the salt pillows and domes. The 2D basin modeling demonstrates that the geometry of the structures is prone to receive liquid hydrocarbons migrating from deeper depocenters.

Meanwhile, the exploration blocks from sector SS-AUP4 were ranked as Priority 2. As you can see in Figure 3, most of the blocks are located close to a main depocenter of the pre-salt sequences in the area. In addition, the integration of satellite oil slicks, oil seeps and Advanced Geochemistry Technology (AGT) together with PSM allows us to unequivocally suggest the presence of active lacustrine source-rock systems in the outboard area of the basin. The evidence points to significant opportunities for O&G exploration in this remote and unexplored province. Moreover, the results indicate that integrated multiparameter surveys can improve the understanding of petroleum systems in frontier areas, potentially opening up huge new exploration frontiers, as is the case for the pre-salt realm in the ultra-deep outboard areas of the Santos Basin.

And finally, the blocks from sector SS-AP4 were ranked as Priority 3 due to their association with an overmature lacustrine Barremian source rock generation pod where the oils have been highly cracked. Moreover, no oil slicks were observed in the area. Indeed, the Advanced Geochemistry Technology (AGT) data from the BPS Geodatabase indicates that the condensates recovered from the nearby post-salt Tubarão and Caravelas wells are mixtures of highly-cracked lacustrine and non-cracked post-salt marine oils sourced from the upper Barremian lacustrine saline Itapema (rift) and the Albian-Cenomanian Guaruja (drift) formations. For example, the condensate recovered from well 3-TB1-BSS (Tubarão field) presents a 3- + 4-methyldiamantane concentration of 90.1 ppm, obviously suggesting that it has had a majority charge from an overmature deep lacustrine gas source (Vitrinite data over 2.1%). This, in turn, suggests that the hydrocarbons were expelled from a post-mature source rock pod to the extent of being in the dry gas window. With this level of advanced maturity, one can conclude that the charge to the pre-salt reservoirs in this deep domain of the basin would consist of dry gas. With all this in mind, reservoir quality appears to be the main exploratory risk in the area.Well, that should give you an initial idea of the massive potential that lies in the outboard of the Santos Basin. For those looking to dip a toe in, the BPS Geodatabase has all the data and analysis your team needs to assess the blocks before taking the plunge in October. And for those looking for extra expertise, get in touch to learn more about our ongoing state-of-the-art 3D PSM studies of the inboard and outboard Santos Basin. Our list of leads generated to date conservatively points to an additional 100 billion boe in the basin’s outboard frontier!

And finally, BPS is also organizing a detailed oil slick, piston core, heat flow and oil/ gas chimney project to be launched in June, with delivery expected by August 2021.

Home / Santos Basin: It’s out there, get ready