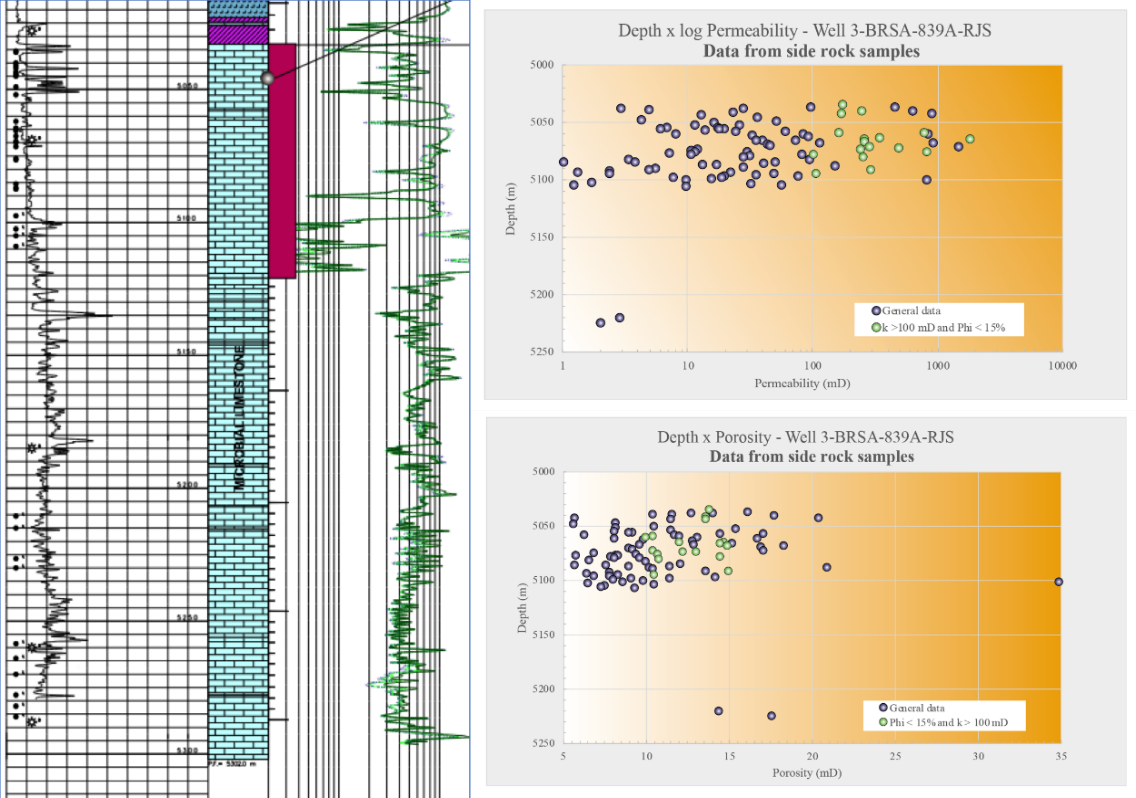 The aggressive exploration and production campaign in the pre-salt Santos Basin over the last decade has led to the identification of important challenges for a better description of the elements and processes of the petroleum system in this prolific region.

According to our recent study (to be published later this year in AAPG Memoir), there is strong evidence that the carbonate reservoirs of the Barra Velha and Itapema formations are naturally fractured and show lateral and vertical hydraulic continuity in all the sedimentary structures of the microbialites and coquina carbonates of these formations. These characteristics have been shown by our integrated studies using petrophysical analysis of cores and side-wall rock samples, electric logs and data from formation tests and recently drilled wells, all available in the BPS Geodatabase. Such fractures allow outstanding production flows, in some cases (i.e.,7-BUZ-10-RJS) producing almost 70,000 boe/day. In fact, there are currently more than 50 wells in the Santos Basin producing over 20,000 bbl/day (Fig. 1).

It is important to note that this better understanding of reservoir characterization and fluid distribution in porous media will have a significant impact on improving the dynamic modeling of the petroleum systems, in particular the modeling of the flow behavior of the pre-salt reservoirs in the exploration of the frontier outboard area of the basin.

According to our recent study, the carbonate reservoirs in the pre-salt usually show three distinct characteristics:

These sedimentary units underwent intensive tectonic processes that resulted in folding and faulting of the strata, leading to the development of a network of extensional micro-fractures and fractures. Naturally fractured reservoirs are usually described according to pore configuration, with two pore space systems: (i) fine crystalline intergranular structures made of rock material, referred to as matrix; and (ii) large openings generated by fracturing (fractured openings) and cement dissolution (vugular openings) of the primary rock material.

The evaluation of pre-salt well data from the BPS Geodatabase, complemented with structural geological studies, showed evidence of a regional network of extensional micro-fractures and fractures, as well as vugs, in most of the carbonate facies of the Barra Nova and Itapema formations. The wellbore cores from the Buzios, Sapinhoá and Lula fields, among others, show some fracturing in the core, along with parallel sets of fractures in the same core, as shown in Fig. 2.

The structural features of the naturally fractured reservoirs greatly impacted the petrophysical properties of the reservoirs, leading to the existence of zones of high permeability with relatively low porosity. Permeability and porosity variations with depth can be seen in Figure 3 from well 3-BRSA-839A-RJS of the Lula Field (data interval between 5,025 m and 5,110 m), where the anomalous data are highlighted in green for permeability and porosity. Many other similar examples for most of the oil fields in the Santos Basin can be found in the BPS Geodatabase.

The existence of a sedimentary framework containing fractures, micro-fractures, vugs and active faults, a common characteristic of naturally fractured systems, explains the hydraulic connectivity observed across all the producing intervals of the carbonate reservoirs of the Barra Velha and Itapema formations.

The wireline formation test analysis of well 3-BRSA-1064-RJS in the Buzios Field (depth interval between 5,425 m and 5,850 m) shows the same pressure gradient for the fluids in the Barra Velha and Itapema formations, a clear indication of hydraulic interconnectivity, as depicted in Figure 4. Several oil samples have been collected at different depths and as expected, the oil molecular signature, density and viscosity are virtually the same (e.g., 26 to 27 °API).

Natural thermal convection across the entire fractured system may explain the absence of oil gravity segregation because this phenomenon induces fluid circulation generated by buoyancy forces caused by density variations with temperature. The fluid velocity is very low, particularly for the flow in porous medium, and it has been in place since hydrocarbons charged the reservoirs. As such, the resulting effect of natural convection is the homogenization of hydrocarbon composition and the physical properties of the oil phase and reservoir fluid.

Our ongoing paleogeographic reconstruction and forecasting of the mid-late Aptian microbialite carbonates of the Barra Nova and upper Barremian coquinas of the Itapema Formation carbonate reservoirs of the outboard Santos Basin, together with our 3D PSM, suggests that the same reservoir facies and perm-poro and fractured systems are expected to be widespread across the entire area. Although heavily based on 3D PSDM seismic, potential methods and petrophysical, PVT and well data, the feeling is that the same outstanding production flows are likely to repeat in this new exploration frontier.