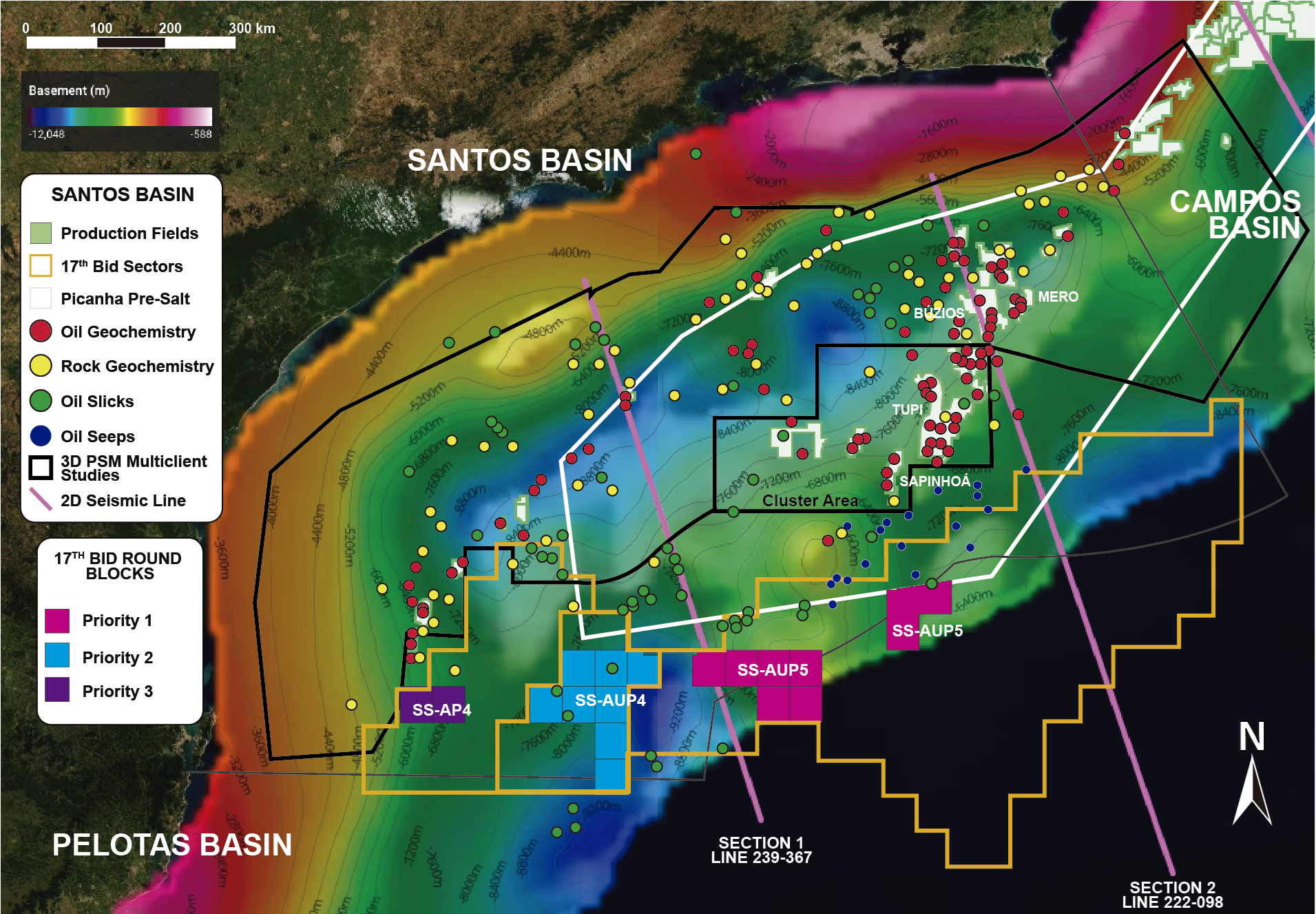 Natural oil seeps and seepage slicks have historically provided invaluable information to oil explorers in frontier deep and ultra-deep-water areas for the assessment of leased and/or open acreage exploration areas. Foremost, they are considered a direct hydrocarbon indicator for the presence of active petroleum systems in areas that have not yet been drilled.

In order to lower exploration risk and gain a better understanding of the presence of working petroleum systems in the unexplored areas to be offered in the 17th ANP Bidding Round, BPS together with Geospatial Petroleum (GP) are preparing an extensive detailed local evaluation of the presence and behavior of oil slicks/seeps in the areas on offer. The areas to be investigated include the outboard area of the Santos, Campos and Pelotas basins, as well as the ultradeep waters of the Potiguar, Sergipe-Alagoas, Para-Maranhão and Foz do Amazonas basins.

The identification of seepage slicks in offshore areas of Brazil started more than 30 years ago and has proven them to be abundant and widespread in almost all Brazilian offshore basins (Miranda et al, 1998; Mello et. al, 2000; Miranda et al., 2004; Mano et al., 2016; Mello et al., 2019; Beisl et .al, 2021). The abundance oil slick features on the sea surface is the result of the convergence of working petroleum systems, an optimum tectonic-structural framework, trap/seal performance, temporal persistence and environmental scenarios (Fig. 1). In summary, if such features follow strict patterns, oil and gas effectively leaks from deep source-rock/reservoir systems to the sea floor, and consequently to the water surface.

The massive volume of quantitative satellite oil slick results in the BPS Geodatabase has contributed tremendously to the understanding of the working petroleum systems in new hydrocarbon frontiers in many deep and ultradeep-water areas of the Brazilian marginal basins. In fact, with a focus on the areas to be offered in the 17th ANP Bidding Round in October of this year, BPS is currently applying cluster technology via a new survey aimed at complementing our library of oil slick data already available in the BPS Geodatabase. Figure 1 shows the distribution of oil slicks along the entire coast of Brazil, with the exception of the Pelotas, Campos and Cumuruxatiba basins, for which most of the data is proprietary and cannot not be discussed here.

The benefits of cluster oil slick satellite technology have a number of partly overlooked aspects. Cluster technology has evolved so much in recent years that it has become an indispensable tool in the course of exploration and risk assessment of undrilled frontier sedimentary basins, as well as enabling not only the confirmation of the presence of working petroleum systems in surveyed areas, but also for estimating the volume of leaked hydrocarbons and identifying the leak location on the seabed. The most important point, however, is that oil slick/oil seep identification presents value in itself, as it is the only technology that can confirm the existence of a working petroleum system in a frontier area without drilling a well.

The application of Artificial Intelligence (AI) to the satellite oil slick concept has enabled great advances in image interpretation, including a better understanding of how to identify oil slicks from different sources on the sea surface using Synthetic Aperture Radar (SAR) images. Machine Learning (ML) is a subset of Artificial Intelligence that includes abstruse statistical techniques and enables machines to emulate the human capacity to reason, perceive, make decisions and solve problems using a set of rules and algorithms.

The exponential growth in the volume and diversity of oil slick data, along with the increasing capacity for computational processing, has allowed the development of several innovations in the exploration of oil and gas using SAR imaging. The use of these Machine Learning algorithms covers several methods and techniques that make the identification of oil on the sea surface an effective and intelligent application, ensuring explorers a powerful and an accurate tool (Fig. 2).

The C-band Radarsat-1, Radarsat-2 and Sentinel-1 image processing is now carried out using a cluster approach with a high-performance textural classification procedure. The textural package is efficient in digital treatment of SAR images, aiming to identify areas with distinct roughness on the sea surface. This procedural package enables accurate identification of oil features related to seepage slicks and oil spills (Figures 3A, B, C, D). The repeatability of features interpreted over the same region but not related to production activities confirms the existence of oil seepage from active petroleum systems in the subsurface (Fig. 3E). A group of seepage slick features that originate in the same small region is assigned as a ‘Seepage Slick Cluster’, and each feature is labeled as a ´Cluster Seepage’ (Fig. 3F). These Seepage Slick Clusters are commonly associated with the location of salt domes and other salt-related structures derived from intense halokinesis where many structural and stratigraphic traps controlled the seafloor topography (Fig. 3H). Likewise, long-term monitoring using SAR images over offshore hydrocarbon production regions presents many occurrences of identified oil spills, forming a historical collection of oil spill datasets in a production area.

Accidental pollution at sea can be also associated with illegal discharges from ships along maritime routes. In most cases, the association of dark smooth textures and bright spots in SAR images is characterized as pollution discharge. In this situation, the labels ‘Oil Spill’ and ‘Identified Target’ are assigned for each interpreted feature (Fig. 3G). Nevertheless, in the process of feature extraction, seepage slicks can be isolated to the neighborhood of a cluster seepage, in which case the feature is labeled as ‘Orphan Seepage’ until a new cluster arises in that location. The same consideration can be applied to oil spills. Isolated illegal discharges inside a production region or along maritime shipping routes are interpreted, but the polluting origin is not recognized. These features are labeled as ‘Unidentified Target’.

BPS together with Geospatial Petroleum are applying Seepage Slick Cluster Technology (SSCT) in the deep and ultra-deep waters of the Santos, Campos, Espírito Santo, Sergipe-Alagoas, Potiguar, Para-Maranhão and Foz do Amazonas basins. The aim is to identify the source of seepage slicks interpreted from Radarsat-1, Radarsat-2 and Sentinel-1 SAR images using an extensive database of oil slicks and complex algorithms based on Artificial Intelligence (AI). This methodology offers the oil industry a very effective, precise and low-cost tool to improve the petroleum system evaluation in frontier offshore areas. The aim is to confirm them using the sea floor core survey, oil/gas chimneys and 3D PSBM technologies.

For the SSCT be successful, a huge database with more than 16,000 oil slick features was built by BPS/Geospatial Petroleum based on long-term monitoring of (1) different petroleum system regions associated with intense halokinesis basins; (2) oil platform zones; and (3) regions with intense maritime traffic. More than 1,000 Radarsat-1, Radarsat-2 and Sentinel-1 images were interpreted to build an accurate database of reliable polygon seepage slicks and oil spills organized and stored in a GIS platform. Each feature of the database presents several radiometric (or physical), geometric and contextual attributes. The database was built considering images acquired over the entirety of Brazilian offshore basins, especially the Santos Basin and the Brazilian Equatorial Margin, as well as the Gulf of Mexico, Angola and the Caspian Sea (Fig. 4). All the oil slick features were interpreted using the same textural classification protocol to ensure the accuracy of the results. During the learning process, different approaches with train and test samples have been tested to assure the best results. So far, the results from the optimized parameters have offered accuracies in identifying and confirming oil slick source of about 74%.

Based on the best fit algorithm established by the learning process, the next step corresponds to how to apply the learned process in different regions of interest while avoiding very expensive data labeling efforts. The challenge is characterizing the origin of an isolated oil slick that is unlikely to constitute a seepage slick cluster. For this situation a transfer learning approach is employed to deliver previously learned knowledge in the Gulf of Mexico, Angola and the Caspian Sea in order to identify the oil slick cluster sources across the ultradeep waters of Santos, the Brazilian Equatorial Margin, the Guianas and Suriname, Sergipe-Alagoas and Colombian offshore regions. The results to date have been promising and also show that many subtle specialties regarding SAR sensor, spatial resolution and incidence angle are relevant in assigning oil slick origin.

As a result, BPS and Geospatial Petroleum are able to offer the market an intelligent solution using learning processes to identify the sources of seepage slicks interpreted from Radarsat-1, Radarsat-2 and Sentinel-1 images using an extensive database of oil slicks and complex AI algorithms. This methodology offers the oil industry a very effective, precise and low-cost opportunity to improve petroleum system evaluation in frontier offshore areas.

Example of satellite oil slick identification as a fundamental tool to lower the exploration risk in the ultradeep outboard area of the Santos Basin, Brazil

Figure 5 shows the Southern area of the Santos Basin, where BPS carried out one of its most recent satellite oil slick projects. As a result of the textural classification, several regions with smooth texture associated with seepage slicks were identified in the Radarsat-1 and Sentinel-1A and Sentinel-1B images. After the application of strict classification to eliminate false targets using ancillary oceanographic, meteorological, offshore oil facilities and ship traffic information, more than 50 sea surface morphological features were interpreted as seepage slicks using 16 different dates of Radarsat-1 and Sentinel-1 imaging (Fig. 5). They range in surface area from 0.053 to 28.124 km2, with a mean of 3.023 km2 (standard deviation ± 4.391 km2). As you can see in Figure 5, most of the features interpreted as seepage slicks occurred over the continental crust, and approximately 51% are located over water depths of 2,000 m or more. However, several confirmed oil slicks were also identified in the outboard area located in the ultradeep-water portion and around the transitional area between continental and oceanic crust in the Southern Santos and Northern Pelotas areas to be offered in the ANP’s 17th Bidding Round in October 2021 (Fig. 5).

The blocks were prioritized from 1 to 3, taking into consideration the petroleum system approach from source to trap, integrated with oil slicks detected by satellite images (SAR), oil seeps detected by seabed piston cores and advanced geochemistry of oils and source rocks from the oil fields found to date in the Santos Basin (Figure 2). Note the limits between the Santos and Pelotas basins and their association with a major depocenter where a Barremian source-rock system is expected to be present. All the data and interpretation are part of the BPS Geodatabase.

Well, that should give you an idea of the major potential of “Seepage Slick Cluster “Technology (SSCT) for the identification of effective petroleum systems in frontier areas. For those looking to dip a toe in, the BPS Geodatabase/Geospatial Petroleum have all the data and analysis your team needs to assess the blocks to be offered in ANP 17th Bidding Round before taking the plunge in October. And for those looking for extra expertise, get in touch to learn more about our ongoing state-of-the-art seepage slick cluster, gas chimney and 3D PSM studies of the outboard Santos Basin. In addition, BPS is organizing a detailed study for the deep-water areas of the Para-Maranhão and Potiguar basins for delivery by September 2021.