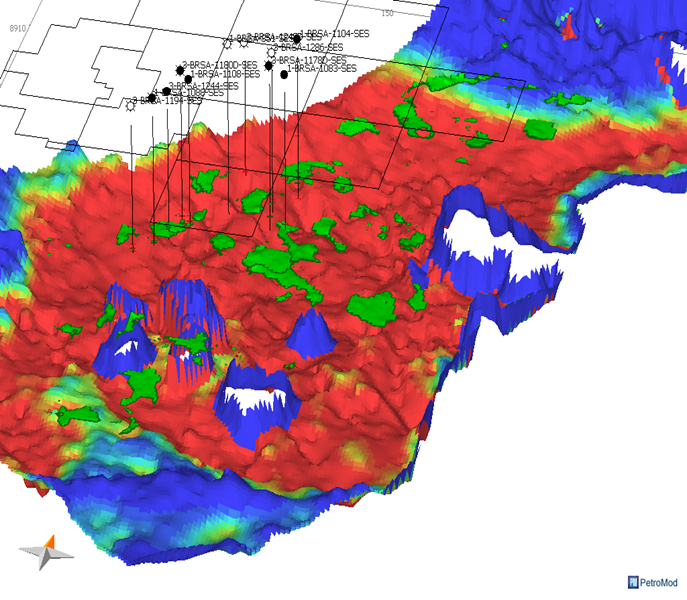 The Sergipe-Alagoas basin is perhaps the highest potential area out of Brazil’s pre-salt province. The basin is mature in shallow waters and onshore but remains a frontier in the deep and ultra-deep waters (Fig. 1). Recent ultra-deep discoveries confirmed light oil in turbidite reservoirs with 30 to 100 meters of thickness and API of 26º to 43º (depths of targets > 4.500 m, at water depths of 2,000 to 3,000m, on average).

BPS, in partnership with TGS, recently performed a detailed study integrating the most up to date 2D PSDM seismic data from TGS with well date from more than 50 nearshore and deep-water wells from the BPS Geodatabase and a comprehensive oil slick survey (Fig.2). This was used to create a quantitative petroleum system basin model and identify leads using both Petromod and Trinity software, substantially increasing the potential of the basin.

The petroleum system efficiency in the Sergipe-Alagoas Basin was already proven via several onshore and nearshore fields in production (e.g., Carmópolis, Pilar, Dourado, Piranema, among many others), as well as new ultradeep-water discoveries (e.g., Barra, Cumbe, Farfán, Moita Bonita, Poço Verde, Muriú, and others; Fig. 2) that proved the widespread presence of an active petroleum system in the basin. The high quality of the seismic imaging made it possible to map several leads in the rift and open-marine plays, mainly composed of fluvio-deltaic and turbiditic sandstones, as well as carbonates located over structural highs, which add significant volumes in combined or structural traps (Fig. 3). The results of the 3D petroleum system basin modeling (PSBM) study, based on 2D seismic data from TGS (processed using advanced and broadband techniques) and both Trinity and PetroMod basin modeling software, suggests the presence of world-class oil, condensate and gas volume containers, thus opening a huge new frontier for Sergipe-Alagoas Basin exploration (Fig. 4).

The leads in the Rift Plays are positioned in the areas of charge convergence from the generative depocenters, fed with black and cracked oils. Likewise, the bypass to Cretaceous and Paleogene plays will likely be effective for mixed marine non-cracked oils with lacustrine cracked and highly cracked oils recently identified in the basin reaching the overlaid turbiditic reservoirs. The results showed that the mapped leads are of world-class size, illustrating the importance of systematic seismic & well mapping in conjunction with advanced geochemistry and basin modeling. The mixing characteristic of non-cracked and cracked oils with multi-charge histories charging all marine reservoirs is consistent with the deep troughs mapped on the seismic, indicating a well-developed rift section with high probability of being the main generative source system basin (Fig. 5).

The complete evaluation encompassed petrophysical characterization of the reservoirs, trap mapping, analysis of oil characteristics, petroleum system modeling and stochastic volume & risk quantification, which led to the identification of outstanding opportunities for future exploration and drilling.

Download the full brochure of this paradigm shifting study or get in touch to learn more.