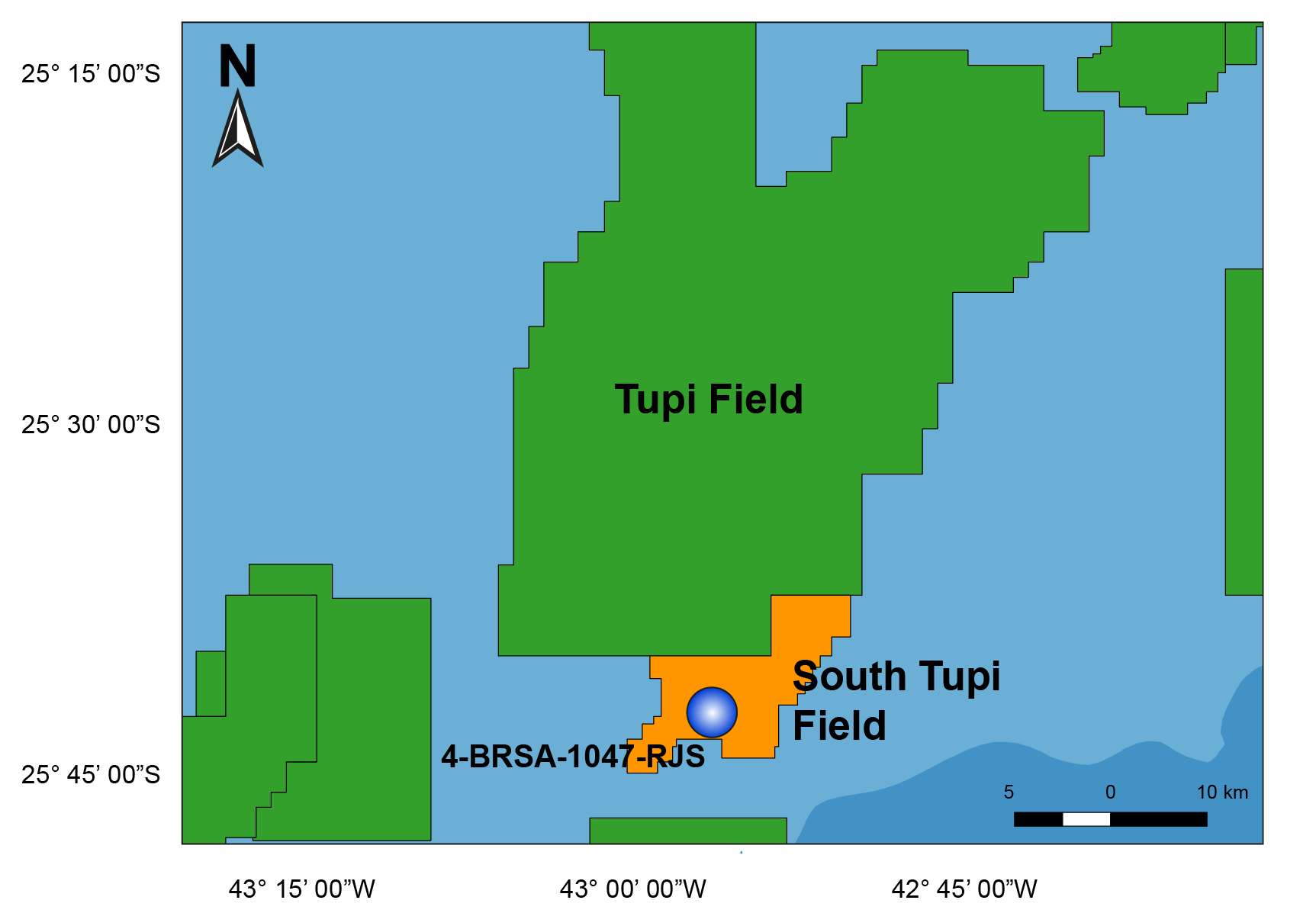 The BPS Geodatabase includes a comprehensive collection of reservoir data that are applied to:

Using these datasets for key wells in the Santos and Campos basins, integrated wellbore analysis highlights important features of the reservoirs such as the presence of naturally fractured systems, hydraulic continuity in all intervals of the producing formations, evidence of oil wettability in the carbonate reservoirs and the occurrence of compositional grading when the hydrocarbon fluids have very high CO2 content.

To illustrate these features in the reservoirs of the Santos Basin, the application of integrated wellbore analysis for well 4-BRSA-1047-RJS is presented below.

The well was drilled in the Transfer of Rights area of the Brazilian pre-salt, which is operated by Petrobras in accordance with the new regulatory regime created in 2010 to grant licences to the Brazilian oil major to produce up to 5 billion boe in the Buzios field and surrounding areas. After appraisal, the well became part of the South Lula Field, located in the central portion of the Santos Basin at a water depth of 2,182 m (7,157 ft.) and around 230 km (143 mi.) from the coast of Rio de Janeiro,  as shown in Figure 1.

The influence of reservoir heterogeneities in the petrophysical properties have been observed in several samples, particularly because of the unusual permeability-porosity characteristics of the reservoir rocks, showing some zones with high permeability and relatively low porosities. This petrophysical behavior results from the existence of a regional network of fractures, microfractures and vugs in all the carbonate facies, characterizing a naturally fractured system.

Permeability and porosity evaluation by petrophysical logging also confirm this anomalous behavior, as shown in Figure 6, where the rock properties were determined by Nuclear Magnetic Resonance (NMR) logging.

The normalized water-oil relative permeability curves for the plugs at the same depths are depicted in Figure 7.

Note that the intersection points of the relative permeability curves have water saturation of less than 50%, which is strong evidence of oil wettability in the microbialite reservoirs of the field.

Irreducible water saturation ranges from 22.3% to 30.5% and residual oil saturation from 5.7% to 17.4%, as observed in the table of the end-point relative permeabilities.

Capillary pressure measurements using the centrifuge method have also been analysed, with the results shown in Figure 8.

The capillary curves obtained for samples at three different depths show the irreducible water saturations ranging from 23.6% to 28.9%, which is in line with the range obtained by the relative permeability measurements.

The static reservoir pressure obtained by the bottomhole sidewall-rock measurement at different depths of the shallower zone of the Barra Velha Formation is plotted in Figure 9. The linear relationship between the reservoir pressure and depth in a thick interval of 93 m (305 ft) is a clear indication of hydraulic continuity in the entire zone.

The oil gravities for fluid samples at four different depths, measured from the top to the bottom of the oil zone, are very close to each other (26.5 °API on average), as shown by the yellow dots in Figure 9. This indicates a lack of gravity segregation in the reservoir. A plausible explanation for the oil homogenetization in the large interval may lie in the effect of natural thermal convection in the entire naturally fractured system.

The oil gravity measured by the DST was 28.8 °API, which is a little higher than the measurements of the wireline formation test. The Gas-Oil Ratio (GOR) was 210 std m³/std m³. No water production was observed.

The CO2 content was 18%, obtained from the compositional analysis of the separated gas, performed on the drilling rig.

The PVT analysis was performed with oil samples collected during the DST. The compositional analysis of the oil, gas and reservoir fluid is shown in Figures 10, 11, and 12, respectively.

The CO2 content in the gas phase was 17.05%, which is very consistent with the DST measurement. On the other hand, the reservoir fluid holds CO2 content of 12.9%.

The bubble point pressure was 375.6 kgf/cm² (5341 psia), showing a fairly high degree of undersaturation based on the initial reservoir pressure of 553.3 kgf/cm² (7868 psia) obtained by the DST.

The primary PVT properties (formation volume factors of oil and gas and solubility ratio) are shown in Figures 13 to 15.

The relationships of oil and gas density and viscosity with pressure, as well as the Z gas compressibility factor,  are also provided in tables in the BPS Geodatabase.

Final Remarks
A better understanding of the rock and fluid characteristics of the the carbonate reservoirs of the Barra Velha Formation in Santos Basin can be achieved via integrated wellbore analysis using data from laboratory petrophysics, logging, formation evaluation and PVT.

The analysis of petrophysical data available in the BPS Geodatabase has shown strong evidence that the producing zones of the microbialite carbonates behave as a naturally fractured system.

The irreducible water saturation determined by the relative permeability experiments and the centrifuge capillary pressure method are in line with each other.

The pressure gradient determination from the wireline formation test confirms hydraulic continuity across the whole oil producing zone, which can be seen as an effect of the naturally fractured system.

The PVT analysis provides the fluid composition and the PVT parameters that are essential for resource evaluation and dynamic flow simulation.